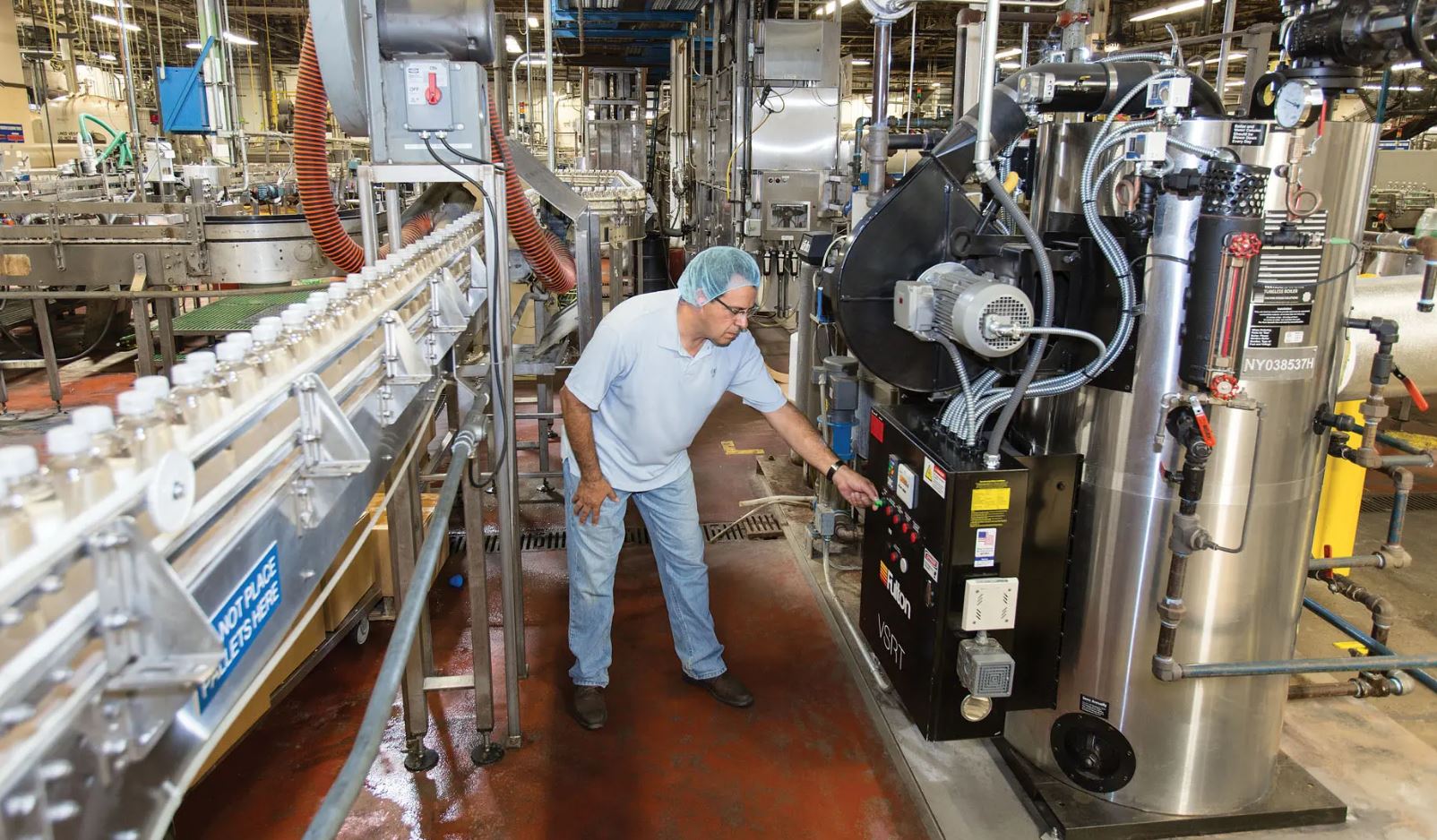 Adirondack Beverages is headquartered in the small town of Scotia, NY, which is in the southernmost foothills of its namesake Adirondack Mountains. Here they produce several varieties of beverages under their own trade name, with another half of their business contracted to manufacturers of third-party beverages bearing private labels. These labels are applied to beverage containers using a shrink sleeve applicator machine (also called labeler).

As the bottles go by on a conveyor, the labeler cuts a sleave off of a roll and positions it over the container (picture a baggie that you open up over the container). The labeler then drops the sleave over a bottle right before it goes through a steam tunnel, where the steam shrinks it and forms it to the bottle. Steam supplied to the steam tunnel is generated by a steam boiler.

Says Joe Mennella, Maintenance Manager at Adirondack: “The sleave labelers are for our higher-end products, like energy and other specialty drinks, our more expensive products.”

Of all the methods used to attach labels to containers – hot air, radiant heat, and boiler steam – boiler steam conveys the most uniform heat – and thus even, from top-to-bottom shrinkage – of the labels that are applied, whether they be for plastic, glass or aluminum cans. It’s best at attaching labels to multi-contoured containers.

But for the steam to work correctly, its temperature and pressure must be consistent, as both affect the shrinkage rates and the resulting quality of the shrink sleeve materials (PVC, PETG, PLA) that are applied to containers.

As Joe says, “We’re blowing this steam at the containers pretty much wide open. So if the boiler hiccups at all, you won’t have enough steam pressure to shrink the labels.”

That’s why, in 2017, when Adirondack chose to replace their previous boiler, they purchased a Fulton VSRT-30.

It features a fully-modulating burner and up to a 6:1 turndown. Fully modulating burners are designed to safely operate throughout their full ring range from high re to low re.

In addition, the VSRT boasts an impressive 86% thermal efficiency, and 99.75% steam quality from its water-backed design with no refractory.

Its small vertical footprint also lends to the ease of fitting it into a relatively compact space, as well as the ease with which it can be installed.

Let Mason Engineering tell you more about this innovated technology.